On the last trip to Dominican Republic, Doug and Phil were able spend time with several of Carlos’ and Raydel’s ministry teams. Doug has co-authored much of the MCNet materials and is the Executive Director of the MCNet affiliate in Canada called CLIMB. 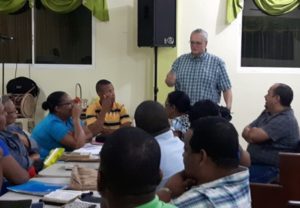 While static pictures of leaders sitting around discussing and learning may not seem that exciting, what the picture cannot convey is the results of these meetings. Over time what happens is that the priorities of these leaders change as do their values. This results in the positive impact with those they serve. Instead of leadership being about position and power it becomes about helping others discover who God made them and being effective in whatever sphere of influence they may have in the church and as members in their community.

As in most countries and cultures, Christian leaders must guard against allowing the hierarchical top-down model of leadership prevalent in our fallen world to influence their leadership model. As Jesus admonished his disciples, “With you it should not be so. . .” (Matt 20:26). While not a popular message, for it means a complete rethinking of priorities and approach to ministry, it is crucial if we are going to see the relationships in the body of Christ be healthy and lasting growth that is reproducible.

Carlos is the Director of an organization in DR that has opened many doors in the country for ICM. He is part of several networks of leaders and has used his influence to champion Jesus’ model of servant leadership with his extensive networks. Though change is not quick or easy, as a ministry we have come along side of him to encourage and help him in this task. We have already seen change in these leaders. They are now mentoring other young leaders and coaching them as they lead their teams. The goal is to mitigate the negative impact of leaders who willfully, or out of ignorance, spiritually abuse those God has called them to serve.

In March the Jeske’s and Friesens’ will be returning to DR in order to teach their marriage seminar for leaders (The First Team). As leaders undergo that personal transformation process, the next most important relationship where servant leadership needs to be applied is in the family unit. If it is not applied there it will be meaningless in their teams and ministries. Thank you for supporting this ministry in prayer as we come along side of these leaders in order to see lasting change in their fundamental attitudes and values. This change has the potential to make a generational impact.

One of the key d 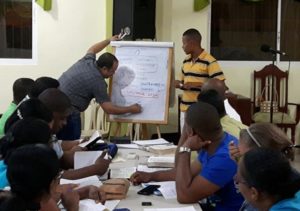 evelopments in our work in Latin America/Caribbean was the relocation of Raydel and Madeline from Cuba to DR. Carlos facilitated this move so that in the next couple years they could help him develop a network of leaders in the region who share the values of the Ministry Coaching Network (MCNet). Using the Mentoring Guides, Raydel and his team are mentoring like minded leaders who will then be able to reproduce these values in others through the same process that has been modeled for them.

Doug and Phil had the opportunity to visit several of these groups, as well as meet with the K2.4.2 (referencing the Koinonia found in Acts 2:42) core team while in the country. While the ministry has only been up and running for about nine months, they already have five different groups and the goal is that this year these will begin to multiply and touch other leaders.

Raydel also continues to stay in touch with the network of leaders he was working with in Cuba. As we are able, we are planning to visit and encourage these leaders in Cuba. Please continue to uphold them in your prayers as they serve under very difficult circumstances.